On Thursday, October 1st, 2009, the case of Louie Knizat was brought to listeners of The Great Canadian Talk Show by his daughter Marilyn and son-in-law Howard, in one of the most moving and disturbing stories of government-sanctioned abuse of power we had ever broadcast.

In our blog post recapping the fight for dignified treatment of the hospitalized Louie and the disrespectful conduct of the Office of the Public Trustee towards his wife Mary, we wrote :

Is it any wonder the Trustee controls $140 Million in liquid assets, when they can bully families without having to account to anybody?

When they can use the families own money to hire lawyers and fight them in court?

When they do not have to be accountable to the Minister of Justice or to the Legislature?

Even after Louie died, the bureaucrats continued to try to starve the widow out, insisting she sign off on an unaudited accounting of their exorbitant fees and agree not to take legal action, and threatened to take her to court -- using the estate's money -- to enact their selfish terms when she refused.

But once provincial Liberal Leader, Dr. Jon Gerrard, got involved, the sharks from the Trustee's Office shrank to meek goldfish.

On March 10th he wrote the Manitoba attorney-general and urged he discuss this matter with the OPT, pointedly stating to Andrew Swan:

"Mrs. Knizat is the executor of his estate and sole beneficiary ... These funds legally belong to Mrs. Knizat and it is wrong of the Public Trustee to indefinitely keep these funds from her." 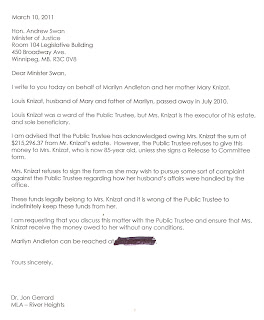 According to Marilyn, thanks to Dr. Jon's help, all but $5000 was advanced to her mother, without being forced to waive her right to demand justice after the abusive behavior and policies of those entrusted by the Selinger NDP with managing Louie's medical and financial care -- and the Office of the Provincial Ombudsman :
I explained to Dr. Gerrard the treatment we got from the assistant Deputy ( Minister of Justice) when we were in Canada about a year and a half ago. We were nicely kicked out of their office . She refused to listen to us or look at any of our records. She told us that they do not assist with individual cases. Then I told them about the phone call I made to the Ombudsman's office. The young lady that answered the phone told me that they do not handle such complaints (regarding the Public Trustee.)...

Dr. Gerrard, Dave Shorr and Peter were the greatest ! They seemed truly interested in helping Mom. I told Dr. Gerrard that my crusade with the Public Trustee awareness was not over ! I made that promise to Mom that I would never quit fighting to make the public aware of how the PT works. She asked me if I would ever quit and I told her I would ...... when I'm six feet under !

I made a call the other to the taxation office because the PT did not forward us any of the tax information to complete Dad's taxes. The guy that answered the phone was from BC and he truly was interested in the PT. We spoke for about an hour and he was amazed ! He said he knew the PT was difficult to work with but he had no idea that this was going on ! He said he would go on line and read the stories about the PT and of course check out the radio show we did.

Well take care and talk to you soon !

Sincerely,
Marilyn Funk Andleton
**************
In the queue for this week:
- More Red River censorship uncovered,
- A federal election exclusive, and
- We'll be at City Hall to question the tax break for the Canadian Museum for Human Rights.

I Just learned of the passing of Marley Rae MacDuff, who was very well known in the Winnipeg music and modeling scene and was a true supporter of the work of TGCTS. My deepest sympathies to her family and many friends.