Allegations that construction sub-trades hired under provincial contracts are being exploited by underhanded payment and contract practices struck a nerve with readers online, with one raising the issue of whether legislation already in the works would solve the problem.

Whistleblower Jocelyn Burzuik of Sundance Construction told us her own experience with unpaid invoices for completed work was echoed by voters employed in construction that she met on the hustings last weekend. 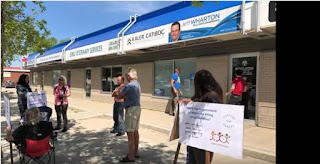 She is seeking election in the Red River North constituency which is a new riding and therefore has no incumbent.
Jeff Wharton, a Pallister government cabinet minister has shifted over from the former Gimli riding to establish himself as the front-runner.

She held a protest march outside his former constituency office this summer about her own unpaid invoices but he failed to show, resulting in Burzuik taking the leap into politics to squarte off against him.

Burzuik told TGCTS that a deliberate witholding of interim payments was starving the cash flow of Manitoba-based general contractors and subtrades, warning out-of-province bidders now being handed contracts were going to learn a hard lesson.

One reader responded on Facebook about being a victim of the contract abuses:


"The cost start to mount ... the money we invested, remitting GST and source deductions... alot of us subs work for pennies compared to the big guys cause we (have) lesser overhead...but we are suffering. All we want to do is make an honest living and be paid for our services".

Another reader stated:
"Lots of the time small construction companies can't keep footing labor costs while they're waiting for a large check to come in and get into a situation where liquidation is the only opportunity"

Another brought up a factor Buznuik hadn't mentioned:

Marty- what about the prompt payment bill in the works? From a supplier point of view, contracts are drawn up with progress payments in the deal. Lacking this, is on the contractor. ... What I am saying so there is legislation in the works to provide a legal remedy for prompt payment for contractors and GC’s. This has been in the works for over a year, most industry associations are pushing hard for it.


In a follow up inquiry, Buznuik said that the payment problems caused
by the government department still wouldn't be resolved.

"The legislation addresses GC (general contractors) to subs and suppliers.
Once GC gets paid,  the subs (sub-trades)do with short period of time.
But it does not address the #1 problem - delayed payment from owner,
normally the Gov, to the GC.

There is no provision for subs even in existing legislation to get paid
if the GC has not been paid.

If the Gov delays, which they do, prompt payment legislation means
nothing. 90% of the time, it's the owner delaying payment.

No one talks about that - yet it's the biggest problem.
The fact is that today, a government Receivable is no longer a
"good" receivable.

She says that factor - that timely payments under a Manitoba government
contract is not seen as worth the paper it's written on - is affecting
access to bank credit for the GC's and sub-trades.

A former 19 year member of the Canadian Military who started her
construction company in 2013, she outlined her own current payment
conditions: 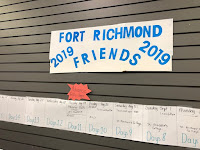 I gladly took up the invitation of Jon Reyes to drop by the opening of his dual campaign office on south Pembina Highway, where he's splitting rental costs and sharing efficiencies (like nails and hammers for signs) with caucus-mate Sarah Guillemard.

Both MLA's were first elected in 2016 and are running again under the Progressive Conservative banner, with Reyes relocating to a newly created riding of Waverly, and Guillemard staying put in Fort Richmond.


Watch this interview clip and see  Sarah describe the slightly altered riding boundaries, and the different issues between the U of M district and the west side of Pembina. She says that expert educators within the riding would help a re-elected Pallister government fix the shortcomings flagged by parents in the overall curriculums.

Donations to help cover the costs of covering the Manitoba election have come in from conservatives, liberals and yes, even NDP supporters, - and from a Green Party member last week too!
There's more news that voters need to know about than just the stories corporate journalism puts out.

The fundraising campaign has focused on finding 100 donors at $50 each, but some people have kicked in more, and some less.

I appreciate every dollar that my readers contribute and will continue to work hard to bring your questions and issues forward and to hold politicians and bureaucrats accountable.

Still to come:
Tonight's Drug and Crime policy town hall hosted by St. Boniface Street Links at 271 Rue de la Cathedrale at 7 PM;
- more election video with PC MLA's Shannon Martin, Reyes and Guillimard;
- more about flawed data and methodology from the WRHA's free needle program failure,
- and City Hall is going to get an earful about a few things too.