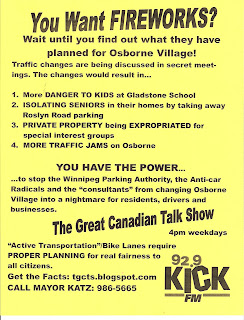 On Canada Day the public got information in plain English, about how Active Transportation in Osborne Village will endanger schoolchildren and seniors, and theatens private property

This week TGCTS will continue to break the real story about the bullying of neighbourhoods in the name of "Active Transportation".

With powerful friends in the city bureaucracy, the bike lobby continues to hopscotch the niceties of things like proper consultations, proof of user volume, and neighborhood safety, and get their way. The flyer distributed in Osborne Village on Canada Day was met with a serious reaction; when Captain Audio followed up last week, he heard an earful from concerned and dissatisfied residents and businesses. As part of our follow up this week, we are planning to conduct an experiment and on Thursday examine the claims made by the bike lobby about bike traffic.

It won't take us till Thursday to follow -up on the bike lane double-cross of the good people of Sherbrook.

In an exclusive interview last Friday, Daniel MacIntyre councillor Harvey Smith said he is going to demand to meet with the city CAO Glen Laubenstein, with hard questions about the partisan conduct of AT Co-ordinator Kevin Nixon.

Nixon, you will recall, told TGCTS in a February broadcast, that if a councillor opposed a planned bike lane, it would not be implemented. That is, until a councillor actually did oppose a bike lane -- at which point the elected representative of the area had no say whatsoever and was ignored.

Not only did Nixon tell the Public Works committee a week ago that he didn't agree with any changes to the full-time, 12 hour a day, 7 day a week Bike Lane plan for Sherbrook north of Ellice, he appeared, according to Councillor Smith, to have withheld vital information from the councillors.

Like for instance, that Nixon had previously agreed to a compromise proposed by the West End Biz and other stakeholders, after being forced to do further consultations by Smith and the City Centre Community Committee.

Here is the summary of that June 18th consultation meeting published by the consulting group MMM, which is also now at the centre of controversy: 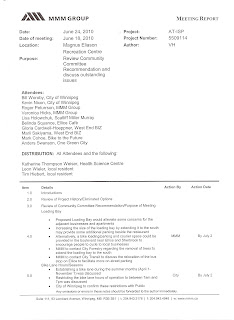 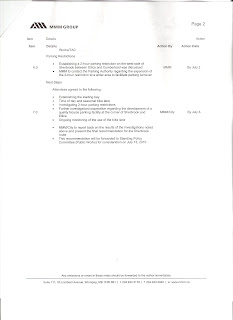 Notice how it says on page 2 "Attendees AGREED to the following:" and went on to itemize things like "establishing time of day and seasonal bike lane" and "ongoing monitoring of the use of the bike lane".

That means, Bike to the Future, one Green City, the Biz, and the Ellice Cafe, as well as the city -- represented by Nixon and his nominal boss Bill Woroby (who will also be getting a call from Smith) -- ALL agreed the 365 day a year, 12 hour a day bike lane was off the table.

That is NOT what the Public Works committee heard last week.

As Harvey Smith said, it appears that the city's representative Nixon reneged on his agreement for compromise with the people of Sherbrook and his colleagues on Public Works (O'Shaughnessy, Vandal and Gerbasi) based their decision on fraudulent information given by advocates for the greedy cycling lobby.

The dirty trick is that there is no built-in avenue of appeal of the Public Works green light for a Sherbrook bike lane -- despite the lack of on-the -record consultation - and as Smith told us, the enabler of this perversion of democracy immediately went on vacation.

Meanwhile, we have waited about 5 weeks for information about how the Berry Street bike lane was planned and rolled out without warning to unsuspecting residents, and 3 weeks for answers about when seniors and residents of Roslyn Road were told they would be forced to give up handicapped parking for a bike lane nobody was even told about.

We won't hold our breath this week expecting any city employee, especially ones on summer vacation, to care about answering the questions our listeners want answers to. After all, it's only their money.
***********************
Other exclusive stories we will continue to discuss this week include;

With 176 reader comments and counting, the biggest elephant in the Free Press newsroom is the smear against Mayor Sam Katz that has backfired all over the face of columnist Lindor Reynolds.

After being admonished by a TGCTS listener for trying to drag Katz' personal life into the civic election, Reynolds emailed him the following:

From: "Reynolds, Lindor"
To: xxxxx

After angry readers had assailed her online with remarks such as:

This is vile hypocritical writing. Presenting this subject and pretending to be above using it to criticize the mayor is a transparent ploy to continue the Free Press's smear campaign against Mister Katz. You should either admit what you're doing and come clean or quit prostituting yourself on behalf of your bosses.

Apparently it matters enough for you to write a column on this.

I'd like to know when the paper will change to tabloid style to fit the tabloid journalism that it is has been publishing for quite while now. This is no longer a paper, it's a rag. However, very good for lining the birdcage.

Lindor - you have to re-evaluate your, for lack of a better name, journalism.don't give us that "freedom of the press" crap. Lately you have been totally off the mark a few times - maybe back off for awhile and get your newsworthy ducks in a row. I agree with one emailer- this is the stuff the Enquirer is made of. You owe a lot of people a huge apology - and

Seven minutes after the email, Reynolds expanded her damage-control to her online readers - at least those that would bother to navigate the comments section:

The golfers out there will know what it means to take a mulligan. The rest of us call them do-overs.

I regret the column. It seemed like a good idea at the time. Mea culpa.

FP readers were not impressed, and have repeatedly asked when an explanation for this alleged journalism will appear in print. That is where the vast majority of Free Press readers would have seen the gutter-level swipe at Katz's alleged dating dynamic written by Reynolds based on a mysterious email "complaint".

Edit: Reynolds' column today is entitled "I Promise Not to Abuse Your Trust Again"

" I haven't been asked to write this column of apology by Free Press city editor Paul Samyn or editor Margo Goodhand."

Again, we won't hold our breath expecting the FP to do the right thing.

But, we will have LOTS to say about the plummeting credibility of the broadsheet which tried 2 smears on 'non-liberal' politicians last Thursday (Katz and Vic Toews) and got caught at it twice.

The regulation of newspapers has now become a legitimate issue among media consumers and print advertisers, who tell us they need protection from the abusive behavior of reporters and columnists just as much as their political targets.
**************

Lots of guests this week including:

- Dan East of Winnipeg Dodge gives insight into the huge increase of new car sales in Manitoba on Wednesday at 5.25;

- and on Thursday at 4.55 we will give away tickets to the Silverados double bill of classic rockers Lee Aaron with special guest Headpins for the August 5th concert, courtesy of Canad Inns. Call in to win!!