It was a political event unlike any I have ever seen in Winnipeg, short on the spectacle and heavy on the drama, as Prime Minister Justin Trudeau tried to dig his way out of the hole he would never let any opponent climb out of.

His 'look at meeee', life-of-the-party behavior had finally put him across a line he himself has drawn repeatedly for not only opponents but members of the Liberal Party. His aura of progressive superiority is permanently punctured and the international media is having a field day .
Wednesday evening Time Magazine published a photo from a costume dinner party from 2001, taken when Trudeau was a teacher at a ritzy Vancouver private school. Most in mainstream media called it "brownface" and he spoke about it  on the campaign plane that night as him "wearing make-up".

He also admitted in a damage-control scrum there was also a high school event where he had done the same to sing The Banana Boat Song (that photo was circulated about an hour later).

The Black Rod noticed that

"before he broke off from reporters, a questioner asked him,  "Do you want to tell Canadians about any other instances where you were concerned that you were racist, or had blackface or brownface on?"

Before the plane landed his scheduled rally at the Grand Mosque with incumbent Terry Duguid in Winnipeg South for Thursday was canceled - and the trickle of "plenty" started the next morning.

Global News posted a video, acquired by the Conservative Party, of a blackfaced Trudeau taken sometime between high school and his teaching job, that Warren Kinsella described as "Trudeau’s acting like an ape. Sticking out his tongue, waving around his arms, shuffling around like a simian would, in a zoo or a jungle or something.


"I showed the video to my shocked colleagues when they came into the office. Two of them are card-carrying Liberals. They agree with me: Justin Trudeau was in blackface, acting like an ape."

The venue chosen to address the 3 now-known incidents was Old Market Square, a park in the scenic Exchange District that has seen all sorts of performances over the decades, but never like the show Trudeau had to put forward.
I got there early enough to have a few casual discussions with media types, and with some of Trudeau's Manitoba MP's.

They were doing their best, in the toughest re-election spot imaginable with a leader in photographs that seemingly undercut their multi-cultural base, as polling shows a neck-and-neck race with the Conservatives.

One senior Parliamentary reporter asked an MP "But he wouldn't pass the vetting (now) ...?", and the response was "(shrug) apples and oranges." That question was heard in conversations a few times. I had guessed that about 4 polling points shifted to the NDP after Jagmeet Singh's response to the news and perhaps 2 points parked with the Green Party, and people more experienced than I thought my guess was on the low end.
A cluster of journalism students from nearby Red River College were at the 3 o'clock position to the microphone where I set up, and they told me about 100 RRC students were there. By my count, excluding a sizeable media contingent, Liberal politicos and those students, there was maybe 100 'voters' in the assembly, a number so low it shocked veteran newsfolks when we talked it over. There was no gaggle of Trudeaumaniacs there and no rent-a-Liberals. 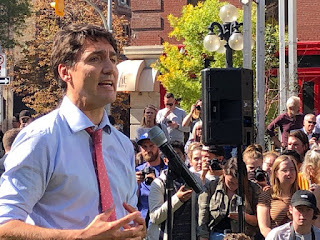 Based on the limited applause interruptions, there was perhaps 40 supporters among the crowd. Outside of about 20 First Nations activists giving him the goods upon his departure, no hecklers or protesters showed up. Probably because the leader under the racism microscope isn't named Andrew Scheer.
The media lined up to quiz the PM after his newest apology.

Among his notable comments, he reversed his own description from the plane of his past costuming mishaps:  "I appreciate calling it makeup, but it's blackface... I have to recognize that I let a lot of people down with that choice and I stand here today to reflect on that and to ask for forgiveness." Watch it here:


While it served him well to call it what it was and not sugar-coat it,  many of his other responses failed to inspire optimism he had succeeded in quelling the uproar.

- Trudeau couldn't say how many other times he paraded around in blackface: "I am wary of being definitive about this. The recent pictures I had not remembered." That cued that this was not an infrequent party trick, to the dismay of hopeful Libs. 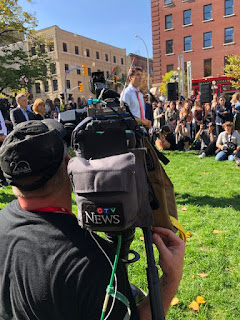 - He framed his lack of awareness of the potential repercussions as a byproduct of his privileged upbringing, which blinded him to the racist overtones his costumed antics might have given off. Why he would throw his parents under the campaign bus, people there could not fathom. Maybe he was blaming his nanny, one half-joked later.

- He never said anything about the incidents in any process of Liberal Party vetting - he first entered public life in 2008 - because he was embarassed about them. He could only vaguely connect his realizing that maybe blackface was "a terrible idea" to becoming an MP for the Quebec riding of Papineau. 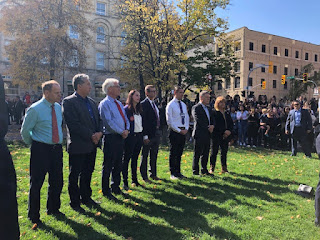 - He said he only mentioned it to his team after he became aware Time was looking for the costume party photos. If true, that would mean he knew before June (when they were acquired).

- Asked if his father Pierre knew about his high school costume, he skated around the question before landing on an answer focusing on what the late Prime Minister think about how Justin had apologized. Afterwards, people said they noticed that.

- Although he mentioned speaking about the photos with his children via Facetime this morning, he made no mention about his wife at all. Afterwards, people said they noticed that omission too. 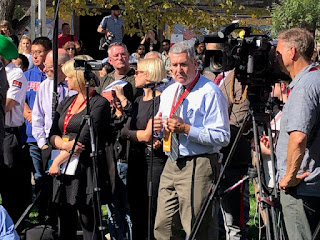 David Akin landed the hardest question in this video, by pointing out that “The prime minister job was not created so you could work through your issues, maybe its time that you realize you’re not the indispensable man as the leader of the Liberal Party?”" - but Trudeau made clear he had never for a mili-second considered stepping away from the helm.

Upon his press attache ending the session, preventing CJOB's Richard Cloutier from getting a question in, Trudeau made his way to his immediate right, going into the crowd seeking somone named Romeo. 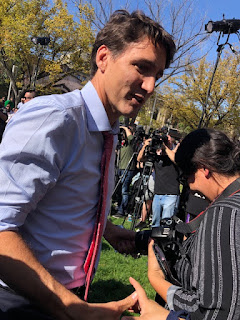 He briefly greeted the man who was seated at a picnic bench, and then worked his way out of the throng shaking hands, and seconds later, there he was, in front of me, looking straight into my eyes, extending his hand.

And with that, Justin Trudeau began to head south towards the exit route,  heckled by aboriginal activists as he left what was surely the toughest day of his political career.
**************
Quite the kick-off to my federal election coverage, and I will be picking up on the City Hall beat again too. 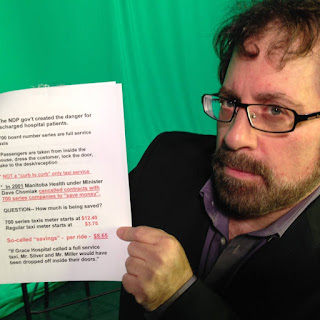 My independant journalism is unique in Central Canada and I rely on reader support to keep this going strong.

I take on issues that mainstream media won't touch, as I proved in my reporting on the Manitoba election. And I will stay on top of those issues, like discarded needles, construction contract corruption, and insufficient candidate disclosures, and make the Pallister government respond to them.
That's my commitment to the community.

If you are able to donate to support this platform, please go to this page and see how. 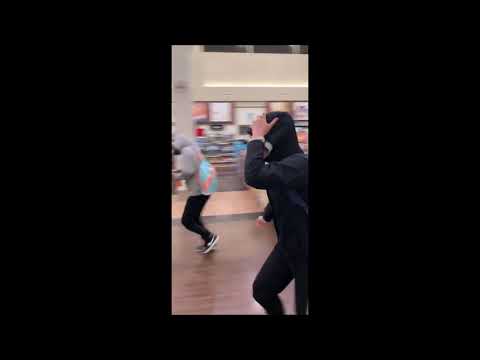